I think having started to do this blog, some people have started associating me with cheese. This is kind of weird for me even though I accept I rather like the stuff, because like I have said before, I have only been into it to this extent for the last year or so! So it was strange to go back to my family home in Essex and for my dad  to eagerly pull this out of the fridge... 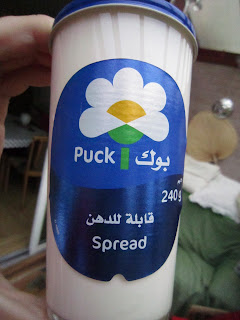 ...and say "Look what I bought for you from Hoo Hing [Chinese store in Chadwell Heath] Christopher! It's some sort of cheese spread thing". I gave my thanks along with a 'poker face' smile, like a father that gets another pair of socks for Christmas. Having been travelling a fair bit, I have come across quite a lot of random food stuffs, and not all of it is what its cracked up to be. I mean, what would you think picking this up, and the only information you had to go on was "Puck" and "spread?"

Surprise 1 - I read the back of the label: "A cheese spread alternative made with milk and vegetable oil". So it's not strictly cheese but still, it has milk in it I suppose.

Surprise 2 - It's from Denmark. Only a surprise because of the text on the label, which made me think it was from the middle-east or Asia. 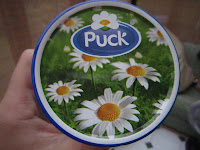 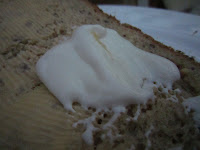 Well, actually it's not astonishing either. I didn't know what to think of it for the entire time I was eating it as it doesn't have a very potent or distinguishable flavour. Maybe it's fatal flaw is that it isn't technically cheese. It is kind of the same in taste as the 'Laughing Cow' cheese spread that comes in little triangular segments, but a little more fluid and not quite as tasty. That said, it is not terrible - like I said - I was indifferent. It is a smooth cheese-like spread that would probably go well with something a bit stronger. Like in a bagel with some smoked salmon. On this basis then, it seems fair that I give it an indifferent score - 5 out of 10. I wanted to be able to say that its pucking good. But its pucking normal...
Posted by Unknown at 22:51